Review of 79000 LEGO Hobbit – Riddles for the Ring

Towards the end of 2012, after the success of the Lord of The Rings series, LEGO released The Hobbit series in line with the release of the movie “The Hobbit : The Unexpected Journey”.  For The Hobbit series there are a total of 6 sets, inclusive of the Toys-R-Us (TRU) exclusive set, 79004 LEGO Hobbit – Barrel Escape.  The smallest set of this series is the 79000 LEGO Hobbit – Riddles for the Ring .

The 79000 LEGO Hobbit – Riddles for the Ring shows the scene of the shores of an underground lake beneath the Misty Mountains.  Here, Bilbo Baggins, discovered a magic ring that was recently lost by Gollum.  But only Gollum, on his boat of Goblin skin and bones, knows the way out of this place. Bilbo Baggins will need to solve the riddles asked by Gollum and escape before Gollum discover that the Ring is gone.  In this simple set, the backdrop is a large piece of rock with a function that reveals The Ring.  It also includes Gollum’s  Boat with bone elements and the 2 MiniFigures Bilbo Baggins and Gollum.  The set also come with a fish for Gollum and of cos, The Ring.

For this whole series, besides the TRU exclusive 79004 LEGO Hobbit – Barrel Escape, I’ve ordered all of mine from Amazon UK.  Especially for the bigger sets, the discounts were quite significant compared with local discounted prices.  Only risk was that some of the sets were not delivered in very good condition and had to make a “complaint” to the Customer Service accordingly.  For the 79000 LEGO Hobbit – Riddles for the Ring that I’ve opened for this review, if you take a closer look at the sides of the box, you can actually see the slight dent at the rear of the box.  Anyway, for this set, as the box is pretty small, the front only shows completed set and the rear manage to squeeze in some close up of the hidden Ring and how Gollum is carefully overlooking it.

Opening up the box, you will find a simple (but folded) instruction booklet and two packages of parts.  As you can see, more of the parts are dark grey in color, telling us that they are mainly use for the rock in the scene.

While flipping through the pages of the instruction booklet, I noticed that LEGO has actually changed the usual second page of any instruction booklet. Replacing the usual plain grey-scaled with two big red colors page of telling us not to mix up the number packs together and to assemble the set on a solid surface in a colorful four frame picture showing a boy opening up a set, wondering what to do, then sorting up the parts by colors and finally assembling the whole set.  Something new to me.  Not sure if you have noticed it too. 🙂

The assembly took less than 15 minutes.  Pretty straight forward and simple actually.  The only messy part is the make sure the orientation of the small 1×1 bricks are correctly placed on the rocky scene.

The main piece of this set is the rocky scene whereby the Ring was hidden.  The designer made use of a lot of 1×1 plates and bricks to create the rocky feel of the set.  The front portion of the scene can be swiveled and open up when the handle by the side of the scene is turned to reveal the hidden Ring.  I’ve always like the Ring since the LOTR series as LEGO has made an effort to plate them with reflective paint instead of given us a dull one using those yellowish colored pieces.

For this set Gollum has a boat with some bone elements.  For this, frankly, I’m not very impressed by it as the whole boat is quite flimsy and it is only held together by a 2×2 grey plate.  For the bone elements, they also drop off very easily whenever you try to put or take Gollum out of the boat.

Not counting the fish or the Ring, there are only two MiniFigures in this set.  For Gollum, it’s actually a pre-fabricated MiniFigure with only his two hands requiring attachment to the body.  Not too sure why LEGO include a 1×1 stud on his hunched back or otherwise, Gollum’s MiniFigure does look quite realistic with his small loin cloth, almost balded head and winkled forehead.  The arms are reusing those used in Star Wars droids which make them pretty flimsy as well when you try to attach the Fish or the Ring to Gollum.

As for Bilbo Baggins, he comes fully suited as per all the Hobbits in the show.  His short legs will present that he is shorter than the other MiniFigures in the Hobbit series.  Bilbo Baggins also has a Elvish knife (or dagger) call Sting that he brings along in his adventures.  For this MiniFigure, the uniqueness is in his two faced head, one normal and the other in fear (or shock, whatever you call it).  This will allow AFOLs to create different scenes using this Bilbo Baggins MiniFigure.

Overall, the set is pretty decent in terms of the number of bricks, the accessories and the two MiniFigures included.  If only LEGO could include a better boat or make Bilbo Baggins’ dagger, glow blue in the dark, like how it does when orcs are nearby in the show, then, I think this set would be the most buyable set in the series.  Scoring, 7 out of 10.  🙂

(2669)
$49.99 $40.00
Recreate scenes from the classic Star Wars trilogy with this awesome building toy for kids, featuring a LEGO brick-built version of Luke Skywalker’s i... read more
(as of September 19, 2021 00:48 GMT +08:00 - More infoProduct prices and availability are accurate as of the date/time indicated and are subject to change. Any price and availability information displayed on [relevant Amazon Site(s), as applicable] at the time of purchase will apply to the purchase of this product.)

(14377)
$129.99
Kids can role-play as heroic warrior The Mandalorian and play out action-packed Star Wars: The Mandalorian scenes with this detailed, LEGO brick model... read more
(as of September 19, 2021 00:48 GMT +08:00 - More infoProduct prices and availability are accurate as of the date/time indicated and are subject to change. Any price and availability information displayed on [relevant Amazon Site(s), as applicable] at the time of purchase will apply to the purchase of this product.) 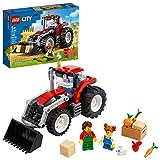 (1326)
$19.99 $16.00
Help creativity gain traction with this iconic LEGO City Tractor (60287) playset, an impressive introduction to the exciting world of LEGO City; Ideal... read more
(as of September 19, 2021 00:48 GMT +08:00 - More infoProduct prices and availability are accurate as of the date/time indicated and are subject to change. Any price and availability information displayed on [relevant Amazon Site(s), as applicable] at the time of purchase will apply to the purchase of this product.) 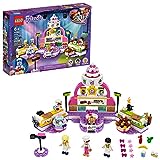 (3068)
$39.99 $31.99
Encourage creative play as kids help LEGO Friends characters craft amazing LEGO cakes in this baking competition toy cooking set; they’ll love pretend... read more
(as of September 19, 2021 00:48 GMT +08:00 - More infoProduct prices and availability are accurate as of the date/time indicated and are subject to change. Any price and availability information displayed on [relevant Amazon Site(s), as applicable] at the time of purchase will apply to the purchase of this product.)

(3264)
$129.99
Children can build Darth Vader’s feature-packed castle on planet Mustafar with this Star Wars LEGO set Includes a buildable TIE Advanced Fighter for a... read more
(as of September 19, 2021 00:48 GMT +08:00 - More infoProduct prices and availability are accurate as of the date/time indicated and are subject to change. Any price and availability information displayed on [relevant Amazon Site(s), as applicable] at the time of purchase will apply to the purchase of this product.)