This is a review of the LEGO Ideas 21303 WALL-E which is just released by LEGO in September 2015 after winning the LEGO Ideas selection process earlier.  This much anticipated set was flying off the shelves of LEGO shops in Singapore as fast as the stocks were coming in.  Till date of my writing, the LEGO Ideas 21303 WALL-E is still out of stock in Singapore.  However, this set is not without issues.  Firstly was the prices of this set in USA, was it USD$49.99 or USD$59.99?  Then, there have also been much complaints about the design of the joints between the head and body of WALL-E.  I’ll come to that later in this article.

WALL-E stands for “Waste Allocation Load Lifter – Earth-class”.  It is a 2008 computer-animated science-fiction film produced by Pixar Animation Studios and released by Walt Disney Pictures. The story follows a robot named WALL-E, who is designed to clean up an abandoned, waste-covered Earth far in the future.  He then falls in love with another robot named EVE and follows her into outer space on an adventure that changes the destiny of both his kind and humanity.  One interesting feature of the film is that WALL-E has very minimal dialogue in its early sequences as many of the characters do not have voices but communicate with body language and robotic sounds.

The LEGO Ideas 21303 WALL-E comes in the typical harden box of LEGO Ideas series and it actually feels quite heavy compared to the normal LEGO sets.  The sides of the box shows the various poses of Wall-E built using LEGO bricks and holding the plant in its right hand.  In case you haven’t watch WALL-E, this plant was found by WALL-E and it represents that life is still possible on Planet Earth.

As shown on the front of the box, this set consist of 677 pieces which explains the weight of the set compared to other LEGO Ideas sets such as the LEGO Ideas 21303 WALL-E or the LEGO 21103 The DeLorean Time Machine.

Remember I was talking about issues with the design of the LEGO Ideas 21303 WALL-E at the joints of the head to the body?  It was first reported in the Brickset article “What’s Wrong with 21303 WALL-E?” that WALL-E’s neck consists of four joints, three of which allow to angle the head vertically while the other allows horizontal rotation. The rotational joint is causing an issue as it does not have enough friction to keep the head in position. Instead it rotates freely, thereby restricting the “poseability” of the WALL-E.  As I’ve obtained my set from USA, I have also written to LEGO Group who requested for me to submit the numbers on the label (these numbers show the batch of the set) before sending the “repair parts” to me.  As of now, I’ve yet to receive these parts but there has been much solutions available on the internet to correct this issue via a better and more secure design.  One of the options by Chris McVeigh can be found here.

Opening up the box, we can see that the whole box is filled to the rim with 8 packages of parts and one thick information and instruction booklet.  It can be seem clearly that the main colors of WALL-E are yellow, black and grey.

On the first few pages of the booklet, there are also information about the background of WALL-E and also it’s LEGO designer who happens to also be the Directing Animator of the film.  Some to highlight is that some how, the glue holding the pages of the booklet does not seems to be very good.  After a few flips, I start to see signs of the pages dropping out.  Hence, do be very gentle when flipping the pages if you do wish to keep your booklet nice and mint.

One good thing about this set is that there are no stickers involved.  There are only 3 pieces with special designs and they are all printed pieces.  Thumbs Up LEGO!

The assembly of the LEGO Ideas 21303 WALL-E took me about 2.5 hours.  I had to dismantle the whole set about 2/3 of the way through the assembly as I suddenly realized that I’ve used some parts with the wrong colors and they cannot be ignored as the parts are at the head of WALL-E.

The completed WALL-E looks very much identical to the one in the animation film, especially with the droopy head and clear black eyes.

The designer even included the two exhausts at the back of WALL-E.  These exhausts can be flipped upwards to flush with the rear of WALL-E.  If only the whole LEGO Ideas 21303 WALL-E completed can be retracted into a cube shape like in the film.

The track portion of WALL-E pretty much followed that in the film, with the necessary LEGO Technics pieces to also make the track and wheel assembly movable.  This is important so that the LEGO Ideas 21303 WALL-E can be converted to a motorized set with the necessary parts.

The good news is LEGO printed the 3 pieces of tiles that have special design (like the words WALL-E) instead of giving us the much hated  stickers.

The arms of WALL-E can also slide along the slot so that WALL-E can reach further forward.  To give the whole arm setup some resistance so that it will be able to hold its pose, the designer added a rubber Technics piece to the inside of the joint to add sufficient friction to prevent the arm from moving too freely.

The hands of WALL-E is made up of 3 “fingers” which are too flimsy to be able to grip or hold anything.  To overcome this, the designer added a little pin that allows a single 1×1 brick to be attached to the arm and yet creating an illusion that the hands are holding on to the item.

See how the hand / fingers are “holding” onto the plant?

The back of WALL-E’s head has 2 tubings that connect to the neck of WALL-E.  But these are there only for aesthetic purposes.

The head of WALL-E is actually held up by the Joint Link W. Bush which are not strong enough to hold up the weight of WALL-E’s head.  Making the situation worse, the whole WALL-E head is able to swivel 360 degrees as it is connected to a neck assembly via a normal black Technics pin.  Hence, if you try to make WALL-E look upwards, the whole head assembly will swivel backwards unless you manage to balance it nicely.

Took me a while to make WALL-E stand in this pose.

This is even more challenging as the whole neck assembly is now straightened.  Once I try to touch WALL-E, the head will swing backwards. -_-”

Despite these issues, LEGO still released the LEGO Ideas 21303 WALL-E in USA and UK last week.  However, based on the comments on the internet, it seems that this problem still persist.  Nevertheless, there has been multiple solutions made available by AFOLs around the round.  If you don’t feel like MOC your solutions, you can also get a US$3.99 kit from Constructibles Website.

Overall, I would still give the LEGO Ideas 21303 WALL-E set a 8.5 out of 10 for it’s nice design, printed tiles and good playabilities.  This set will deserve a 9 out of 10 if LEGO is able to finally provide a good solution for the flimsy head issues.  In any case, happy hunting for a set in Singapore!

$69.99 $69.95
Challenge your construction skills with this LEGO Ideas ISS (21321) display model, featuring 2 rotating joints with 8 adjustable ‘solar panels’, posab... read more
(as of June 15, 2021 - More infoProduct prices and availability are accurate as of the date/time indicated and are subject to change. Any price and availability information displayed on [relevant Amazon Site(s), as applicable] at the time of purchase will apply to the purchase of this product.) 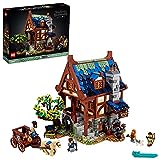 $149.99
Capture the architectural details of a medieval blacksmith’s workplace and home when you take time out from modern life to build this evocative LEGO I... read more
(as of June 15, 2021 - More infoProduct prices and availability are accurate as of the date/time indicated and are subject to change. Any price and availability information displayed on [relevant Amazon Site(s), as applicable] at the time of purchase will apply to the purchase of this product.)

$69.99
Build a ship in a bottle featuring a brick-built cork and wax seal, ship with a captain’s quarters, cannons, mast, crow’s nest, sails, flag, display s... read more
(as of June 15, 2021 - More infoProduct prices and availability are accurate as of the date/time indicated and are subject to change. Any price and availability information displayed on [relevant Amazon Site(s), as applicable] at the time of purchase will apply to the purchase of this product.)

$119.99
Bring to life the rocket launch that took humans to the moon with the meter-high (approximately 1: 110 scale) model rocket of the NASA Apollo Saturn V... read more
(as of June 15, 2021 - More infoProduct prices and availability are accurate as of the date/time indicated and are subject to change. Any price and availability information displayed on [relevant Amazon Site(s), as applicable] at the time of purchase will apply to the purchase of this product.)

$58.44
Role-play as a paleontologist and imagine what life on Earth was like millions of years ago as you build intricately detailed LEGO models of pterosaur... read more
(as of June 15, 2021 - More infoProduct prices and availability are accurate as of the date/time indicated and are subject to change. Any price and availability information displayed on [relevant Amazon Site(s), as applicable] at the time of purchase will apply to the purchase of this product.)