This is a review of LEGO Star Wars Planet Series 3 and 4 consisting of 75006, 75007, 75008, 75009, 75010, 75011 released in 2013.  LEGO started releasing the Star Wars Planet Series back in 2012 with six sets from Series 1 and 2.  Although I’ve bought, built and taken some pictures along the way, but some how, I never got down to write on them until Series 3 and 4.  Basically, the Planet Series consist of a Planet, a Minifigure and a Star Wars Mini vehicle that are related.  For instance, in the Planet Series 3, 75008 TIE Bomber and Asteroid Field, the Planet is an Asteroid Field whereby the TIE Bomber will fly by driven by the TIE Fighter Bomber pilot Minifigure.  Interesting this is, as it gives us some background of how the three components in each set are related to one another in the Star Wars stories while we collect and build them.

Just as a background, the Series 1 and Series 2 of the Planet Series are as follows,

It would be pretty difficult to locate all six of the Series 1 and 2 now if you have yet to collect them till date.  For each series release, LEGO has kindly only tagged three sets instead of sixteen in the Collectables MiniFigures Series.  Although each set cost around SGD$20 – $25 (it has since increased since Series 3 and 4), given the nicely printed Planets, Minifigures and vehicles, it’s actually quite worthwhile especially when they are on sales (20% off) at the major departmental stores in Singapore.

Now let’s start by looking at the three sets in the LEGO Star Wars Planet Series 3.

For each of the set, after opening up the box, you will inside a small instruction booklet and the planet.  To access the parts for the set, you will need to open up the planet like how you crack open an egg.  This way of packing the parts of a set post another challenge to the set designers as they will not be able to have all free play in the size and number of parts to use.  Each of the set will also be assembled to form a stand on which the vehicle and the minifigure can be mounted on.  The stand also comes with a printed plate stating the details of the set.  Between Series 1/2 and Series 3/4, the design of the vehicle stand has changed.  The previous stand was using a black technics pin to secure the bottom of the mini vehicle to the stand.  The new stand (see below), on the other hand, uses a 2×2 plate with a central notch to which the base of any LEGO parts can be affixed.  Although this design is more universal, but it is less secure than the technics pin and hence rendering the mini vehicle more flimsy when attached to the stand.

Series 4 was released together with Series 3 in Singapore.  It consists of the following three sets,

The second set of Series 4 is the 75010 LEGO Star Wars B-wing Starfighter & Endor consisting of planet Endor, the B-Wing Pilot minifigure and the mini B-Wing.  Based on Brickset, the B-Wing Pilot minifigure appeared once in the 6208 LEGO Star Wars B-Wing Fighter set.  Since then, LEGO has not released any B-Wing sets till the recent 10227 LEGO UCS Star Wars B-Wing Fighter.  Similar to the bigger UCS set, the mini B-Wing as also positioned vertically which makes its stand different from the others in the Planet Series.  To achieve the classic cross shape of the B-Wing, this mini makes use of a number of hinges and snaps to allow the wings to be adjustable.  For the rest of the details of the mini B-Wing, they are quite rough compared with the UCS one, not a fair comparison though.  :-p

The final set of Series 4 is the 75011 LEGO Star Wars Tantive IV & Alderaan consisting of planet Alderaan, a mushroom head Rebel Trooper minifigure and the mini Tantive IV.  One of the last affordable set seen to contain this cute Rebel Trooper minifigure was the LEGO Star Wars Rebel Scout Speeder.  If this set has been cheaper, I would seriously consider army building the Rebel Trooper via this set.  For the Tantive IV, it did not appear very long in the Star Wars movies hence many may not remember it.  However, LEGO did release the 10198 LEGO UCS Star Wars Tantive IV back in 2009 although it was not very popular back then.  The mini version of it would be the next best one who wish to have a set of the Tantive IV with its unique features of the massive exhausts and white and red body colour scheme.

Overall, for a LEGO collector, especially a Star Wars LEGO collector, I don’t think anyone will be able to give the Planet Series a miss.  The minifigures and mini vehicles are classic representations of the Star Wars series.  They are also easier to collect due to the lower cost and lesser space to collect and display them.  It is also these sets that got me started to look for the previous Mini Sets released  by LEGO.  I think the question that remains in all AFOLs’ mind would be, how may planets would LEGO release given that there are 460 named planets in Star Wars.

$49.99 $47.00
Recreate scenes from the classic Star Wars trilogy with this awesome building toy for kids, featuring a LEGO brick-built version of Luke Skywalker’s i... read more
(as of May 2, 2021 - More infoProduct prices and availability are accurate as of the date/time indicated and are subject to change. Any price and availability information displayed on [relevant Amazon Site(s), as applicable] at the time of purchase will apply to the purchase of this product.)

The LEGO Movie 2: The Second Part

$3.99 (as of May 2, 2021 - More infoProduct prices and availability are accurate as of the date/time indicated and are subject to change. Any price and availability information displayed on [relevant Amazon Site(s), as applicable] at the time of purchase will apply to the purchase of this product.) 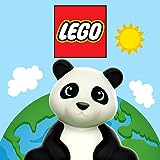 $0.00
Learn important early-childhood skills. Explore a variety of open-ended scenes. Play together with multitouch support. Pretend play stimulates imagina... read more
(as of May 2, 2021 - More infoProduct prices and availability are accurate as of the date/time indicated and are subject to change. Any price and availability information displayed on [relevant Amazon Site(s), as applicable] at the time of purchase will apply to the purchase of this product.)

$229.95
Trigger nostalgic memories as you build this wonderfully detailed LEGO brick Nintendo Entertainment System (71374) and interactive, 1980s-style televi... read more
(as of May 2, 2021 - More infoProduct prices and availability are accurate as of the date/time indicated and are subject to change. Any price and availability information displayed on [relevant Amazon Site(s), as applicable] at the time of purchase will apply to the purchase of this product.)

$5.97 $2.83 (as of May 2, 2021 - More infoProduct prices and availability are accurate as of the date/time indicated and are subject to change. Any price and availability information displayed on [relevant Amazon Site(s), as applicable] at the time of purchase will apply to the purchase of this product.)